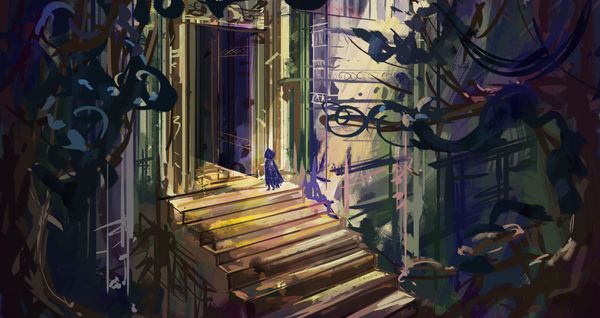 When I chanced upon her early work, which had the diminutive person in the cloak (now dubbed - The Adventurer). It evoked and image of a child entering a new world. The timing of the art matched the opening up of the DeFI space in crypto where developers, speculators, investors and supporters were all waking up to this new world wondering what the adventure would bring.

Did you have any hesitations about collecting Kristy Glas’ first work? How’d you overcome those anxieties

Her art tells a story and so there were no anxieties or hesitation.

What’s your favorite 1-3 Kristy Glas’ works that you own? And what are some pieces that she’s created that you wish belonged in your collection?

The Library Temple and Reaching for the Stars.

Kristy Glas’ has been quite prolific with her work. What’s your favorite series that she’s done so far (eg. Pixel Cats, Adventure Series, Cyberpunk, Cat Doodles, Trees, Clouds, animated video) and what kinds of work would you like to see more of?

And why does that kind of Kristy Glas’ work excite you the most?

It's Art and art should have no reason to justify itself.