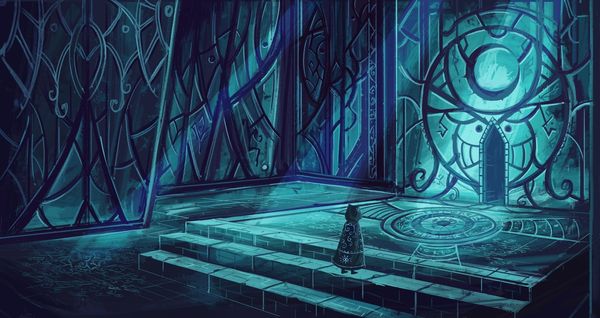 Dustin D. Trammell set the record for a Kristy Glas adventure series with his bidding war against Ioannis (greekdx) for "The Watchful Forest". We're delighted to get an inside view on why Glas' artistic style excites Dustin D. Trammell.

I first noticed Kristy’s work on one of the NFT art platforms. I don’t recall which one, as she’s on most of them, but I do remember it was one of her Adventure Series works.

I immediately loved her art style for those works and sought out more of her work. She has a very consistent style and I immediately thought she would be perfect to illustrate a children’s book that I wrote some years ago.

What’s your favorite 1-3 Kristy Glas works that you own? And what are some pieces that she’s created that you wish belonged in your collection?

Definitely the Adventure Series works. My favorite work of hers in this series is Reaching for the Stars.

I absolutely love all of the constellation runes and symbols on the floor. I didn’t own this one and wished I did as it was sold out prior to discovering Kristy’s art, but I was able to pick it up very recently as a secondary sale. I guess now I need to find more of her art that I wished I owned. Probably more from the Adventure Series.

Kristy Glas has been quite prolific with her work. What’s your favorite series that she’s done so far (eg. Pixel Cats, Adventure Series, Cyberpunk, Cat Doodles, Trees, Clouds, animated video) and what kinds of work would you like to see more of?

Definitely the Adventure Series. Honestly I love everything she produces so as long as she keeps creating new artwork I’ll be happy (:

And why does that kind of Kristy Glas work excites you the most?

I love the setting of the Adventure Series, the stories that come along with each piece, and the mystery around the cloaked figure called the hero in all of the paintings.

I loved the color scheme used in the painting, the story accompanying it was superb. It was also the first painting from the Adventure Series that I had seen with more than one character in it. In this painting, another figure is approaching the Eye of the World, the monument in between the trees, while the hero watches.