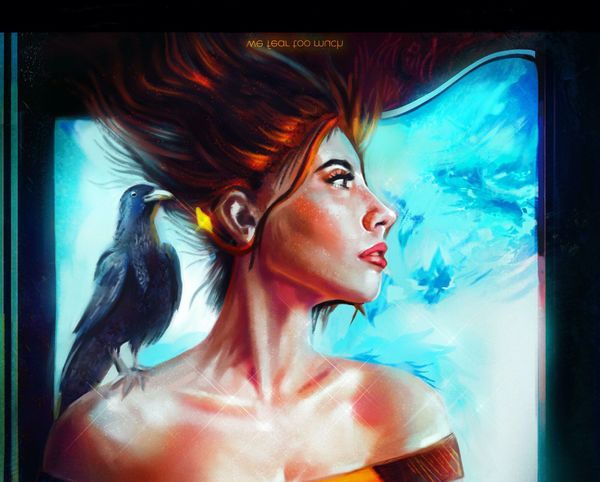 About a week ago, I received a direct message (DM) from parrott_ism informing me that I needed to check out Angelarium by Peter Mohrbacher on MakersPlace. Within a few seconds of examining the heavenly and meticulously imagined angels that Mohrbacher created, I fell in love with his transcendental world—Angelarium.

More importantly, what this quick exchange and fascination with Mohrbacher's work led to was a sinking feeling in my heart—I have overlooked a lot of talented yet underrepresented artists on other platforms since most of my collecting has been on SuperRare.

Feeling rather adventurous and in observance of the rather slow December month that most digital NFT cryptoartists were facing, I decided I wanted to open my range of collecting up to the multitudes of cryptoartists that I knew were hiding right before my eyes by launching my first ever "shill me your art" contest on Twitter.

Many days later and near the tail-end of the contest, I'm proud to announce that the feedback I received from doing this has been overwhelmingly positive. We received dozens of fascinating submissions and thousands of likes across the board. The main objective of rounding on the zonted collection across the platforms was a success. But more importantly, the side effect of generating exposure for underrepresented cryptoartists was the biggest hit and outcome of this experiment.

There were a few hiccups along the way but I'm glad that the cryptoart community members settled the snags in a peaceful and amicable manner. I want to express my heart felt thanks and appreciation to everyone who participated and look forward to what 2021 will bring.

Also, the goal wasn't to specifically just collect the 2 most favorited Twitter shares but to get a nice gamut of work across the entire community. I'm proud to announce the two winning artists, along with some other spice I happened to gather along the way.

#1. "We Fear too much" by ClassyPaints

The more I inspect "We Fear too much", the more I've come to dwell on the artwork. The somewhat wistful look depicted in the character makes me wonder what she is fearing in the moment, but more deeply makes me reflect upon what I'm fearing.

A spectacular rendition of "Eve" descending into the vices and deadly sins that we as human beings are challenged with daily—lust.

"The way home" by lucclop

"Frida and Monkeys" by Stellabelle

"The Statue of Venus" by DaniellaDoodle

"Thats No Moon" by Mandelsage

"House in the Woods" by El-Metallico

Established in 2020, zonted is the premier digital art gallery in contemporary digital art with ownership stored on non-fungible tokens (NFTs) on cryptocurrency blockchains.