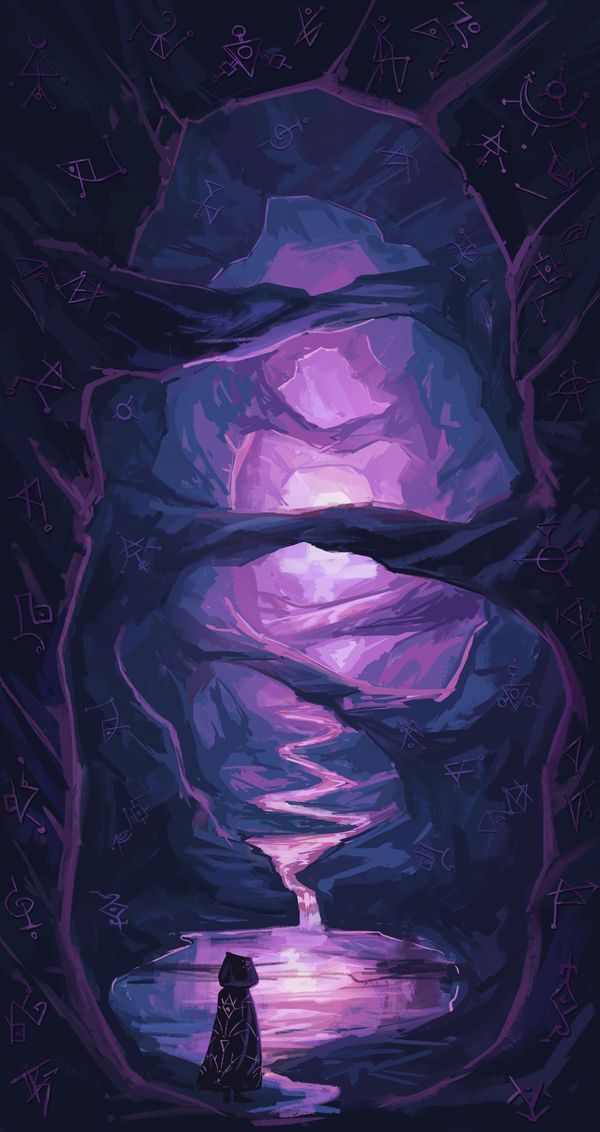 "Kristy is one of the most versatile, talented, kind and generous artists in the NFT space. She is one of the purest and whole-hearted person I have met".

Ioannis (greekdx) is the curator at the Museum of NFT Art (M0NA) and is one of the most widely beloved collectors in the digital NFT space. Just after a few months of dipping his toes in the vast NFT ocean, Ioannis has supported hundreds of artists, collected over 1,000 NFTs, and launched the first NFT subscription box in the space.

I remember surfing on MakersPlace a bit over a month ago and found out about Kristy’s work. I found a piece I fell in love with and started bidding.

I was mesmerized by her fantasy themed art—“The Watchful Forest” was the piece. Dustin D. Trammell and I had an epic bidding war, which at some point I had to tap out. I was devastated as I had fallen in love with that piece. I swore to myself I would be prepared to acquire her next piece no matter the cost.

What’s your favorite Kristy Glas works that you own? And what are some pieces that she’s created that you wish belonged in your collection?

Currently my favorite piece is “Whispering Echoes”. It is a mesmerizing vertical piece which makes it unique just by that factor. The fantasy vibes it excerpts, the sense of infinity and the colors give it the number one spot in my collection.

After that I have to admit that I am still missing a lot from her in my collection. I love my “Cat#78” which I proudly showcase through voxel form in M0NA (Museum Of NFT Art) which is a digital NFT art museum in Cryptovoxels.

Her 5 minute doodles and pixel art is just amazing and I can’t pick my favorite from those! I can’t choose another piece from another collection because honestly, I want them all.

Oh, and I just remembered—I picked up the Cultbiz & Kristy Glas collaboration. Another one of my faves.

Kristy Glas has been quite prolific with her work. What’s your favorite series that she’s done so far (eg. Pixel Cats, Adventure Series, Cyberpunk, Cat Doodles, Trees, Clouds, animated video) and what kinds of work would you like to see more of?

Oh wow this is a tough one. I love all of her work. She is so versatile and talented it’s crazy!

I think she would say her pixel work but I love the fantasy themed work so Adventure and Cyberpunk. Would definitely want to see more of those, maybe a hybrid!

And why does that kind of Kristy Glas work excites you the most?

Because in contrast to other types, like pixel art, Kristy Glas' artwork is 100% distinctive and fascinating for me. I can instantly recognize one of her works from that series but maybe not all times if it’s pixel art.

When you got into a bidding war with Dustin Trammell over “The Watchful Forest”, you eventually gave up. When do you give up when bidding on a piece? And why did that specific piece merit such aggressive bidding at the time? At the time, the prices you were bidding for a Kristy Glas piece would have broken records.

I believe that was one of my first and “hardest” bidding wars. At the time I had gone over budget and at some point, looking into Dustin D. Trammell, I realized he was a big fan of Kristy too.

It seemed he was determined to get that piece at any price so I had to back down. I could feel why he loved that piece so much so I was not angry that the piece was going to someone that appreciates it so much!

A lot of love for Dustin D. Trammell! That was early in my collecting days, after that I started to get relentless with my bidding and even started outbidding big names.

I usually stop bidding after my calculated highest budget is exceeded or if I am bidding against powerhouses like MOCA and Metapurse.

When would you consider “selling” or relinquishing one of your Kristy Glas artworks? Would it matter who you’re “selling” the piece to?

I have had offers on my Kristy Glas pieces lately. Some big ones too. I will never accept any of them.

This goes for all my NFTs. I do not sell art, I just collect it. If I can see an opportunity to flip I might rarely take it but I am not a fan of selling art! That is not the reason I collect. I collect to support artists and collect art pieces that speak to me.

Selling was never a thought or strategy in my mind. I might be “wrong” but that’s my mentality. Ask me again in 10-20 years.